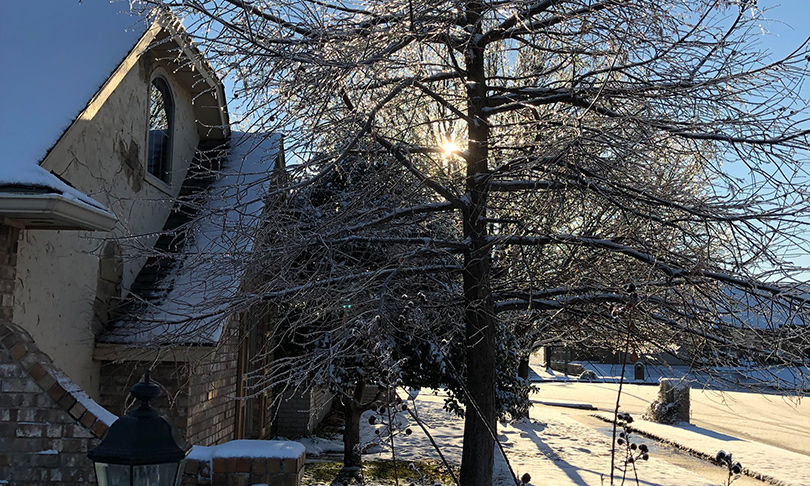 The sun hangs low in the southern sky, a faint, refracted, pale reprise;

A flickering portent of heaven’s reply: “The Sun of Righteousness will rise.”

The winter’s night is bleak and dead with lingering, anxious darkness blind;

But morning comes with One who said: “My life is light for all mankind.”

But the brittle, grave-like cold now loses deathly force: “In him was life.”

This day’s distance from comfort, light foretells: “No need of sun or moon;”

The virgin Mary was a prophet. She composed one of the songs we find in Luke’s version of the Christmas story. Hers was an echo of the ancient hymns of the Hebrew scriptures. It reminds us of the songs of Moses, Miriam, and especially, the song of Hannah. Mary’s song is a prophetic vision of a future time when God in Christ is going to put our broken world back together.

Singing is an important part of the celebration of Christmas. Recently Connie and I got to attend, for a second time, the Christmas festival at St. Olaf College in Minnesota, where our grandson, James Randall Faulkner III, sings in one of the choirs. They sang a modern rendition of Mary’s “Magnificat” by Carolyn Jennings:

The bows of the mighty are broken, but the feeble put on strength. Those who were full are hungry and those who were hungry are filled. Strong is the arm of the Lord, who has scattered the proud in their hearts; God has put down the mighty and lifted those of low degree. … My heart o’erflows, Alleluia!

Mary’s song tells how God is going to turn history inside out, keeping his covenant promises to his people. She repeats the themes of the prophets of Israel who predicted a time when Messiah would come in power to disenfranchise the kingdoms of this world, dethrone tyrants, exalt the humble and invert injustice. Surely this is what we pray for when we pray the Lord’s prayer, “Thy kingdom come.”

In her prophetic anthem, Mary recites God’s word at least fifteen times. Her song mirrors the song of praise uttered by Hannah, the mother of Samuel the prophet in 1 Samuel 2. Just as Hannah spoke prophetically of a new age and kingdom, so Mary spoke prophetically about when her Mighty God would “help Israel remembering to be merciful” (Luke 1:54).  This would be through the Messiah who was even then in her very womb.

Thus, wherever the message of Jesus has gone, it has “clothed the naked, fed the hungry, served those that harmed it, comforted the sorrowful, bound up the wounded, and sheltered the destitute”  (Menno Simons, 1539). “True evangelical faith cannot lie dormant.”

It has opposed unjust practices such as the caste system, child marriage and the immolation of widows in India, human sacrifice in South America, polygamy and slavery in Africa. Those missionaries who stood for justice against evil “understood that their faith was not merely private and devotional, but had implications for all of society. … (They) dispensed Jesus’ message of grace to the world. It was Christianity, and only Christianity that brought an end to slavery, and Christianity that inspired the first hospitals and hospices to treat the sick. The same energy drove the early labor movement, women’s suffrage, prohibition, human rights campaigns, and civil rights” (Philip Yancey, What’s So Amazing about Grace?).

According to Mary in Luke 1 :46-55, there is coming a future, fuller manifestation of God’s mercy. Her words are consistent with those of the ancient prophets who foretold a time when God will bring all of civilization under the rule of his anointed Son. This will mean the end of war, universal justice, the healing of nature, and a spiritual renewal in which God will pour out his Spirit upon all flesh. God’s moral law will be the governing principle of that kingdom.

Theologian R.C. Sproul wrote, “The birth of Jesus did not happen in a vacuum. He was born after generations of promises attached to Israel’s covenant relationship with God. Age after age God had renewed his promises and now they were fulfilled in space and time.”

In the same way, those who believe in Jesus as savior and king will be welcomed into that future glorious manifestation of God’s kingdom. Mary was so sure of its fulfillment, she sang about it as if it had already come. Mary was a prophet.

She reminds us to pray this Advent prayer: “Come, Lord Jesus!”

One of the most attractive features of the Virgin Mary is humility. In her famous song, known as the “Magnificat,” she praises God because “he has been mindful of the humble state of his servant. From now on all generations will call me blessed” (Luke 1:48). God “has lifted up the humble,” she says in Luke 1:52.

Mary is not boasting about her humility. She is, rather,  acknowledging her lowly social position. She is a young woman engaged to a common tradesman, a carpenter. Her town, Nazareth, is not a prestigious city. It is a crossroads village on a trade route traveled by Gentile merchants and the Roman army. The people of Judah scorned “Galilee of the Gentiles,” saying, “Can any good thing come out of Nazareth?”

There is something other than status consciousness or class distinction evident in Mary’s song. It is faithful submission to the will of God for her life. It is a sense of wonder. She is amazed by the honor entrusted to her that she would be the mother of the Savior of the world.

Alexander Maclaren said of Mary, “Think of that simple young girl in her obscurity having flashed before her the certainty that her name would be repeated with blessing till the world’s end and then thus meekly laying her honors down at God’s feet.”

Indeed. That is what Mary does. She glorifies the Lord, not herself. The angel says to her, “You are highly favored. The Lord is with you” (Luke 1:28), and “The Holy Spirit will come on you and the power of the Most High will overshadow you. So the holy one to be born will be called the Son of God” (Luke 1:35). Mary’s response is wonderment and obedient surrender. “I am the Lord’s servant. … May your word to me be fulfilled” (Luke 1:38).

Think of what would happen because of Mary’s humble submission to God. She would bear the whispered ridicule of neighbors. She would risk losing the love of Joseph until the angel appeared to him too (Matthew 1:18-25). She would endure the journey to Bethlehem in late pregnancy, on a beast of burden or in a rickety cart over unpaved roads. She would go into labor and give birth to her firstborn Son in a stable, of all places. Humility on display!

Mary is an example to us. In a Facebook and Twitter culture that honors proud boasting, bullying insults, hatred, factions, and divisions, we need the virtue of humility now as much as ever. Mary’s Son said, “The greatest among you will be your servant. For those who exalt themselves will be humbled, and those who humble themselves will be exalted” (Matthew 23:11-12). Did Jesus think of his mother when he said that?

The great God who said heaven was his throne and earth his footstool said this:  “These are the ones I look on with favor: those who are humble and contrite in spirit, and who tremble at my word” (Isaiah 66:2). It is little wonder, then, that Mary was highly favored by the Lord.

Mary’s hymn was a response to the miracle news that she was to be the mother of the savior (Luke 1:46-55). Her hymn is called the Magnificat because the Latin version of its opening words are “Magnificat anima mea Dominum.” This could be translated, as in the New International Version, “My soul glorifies the Lord.”

Mary was reflecting deeply on who God is and on what God has done. This is a good thing for us to do during this Advent season. With a spirit of joy and gratitude, Mary praises God for his attributes: “For the Mighty One has done great things for me — holy is his name. His mercy extends to those who fear him, from generation to generation.”

During this season of expectation and preparation, there can be no better theme, no better preoccupation, than for us to concentrate on God. Mary sets the example. We join her in praising God because he is powerful, the “Mighty One.”

“Holy is his name,” Mary exults. This is God’s set-apart-ness, his other-ness. “God is light and in him is no darkness,” says John (1 John 1: 5). He is separate from all that is corrupt and evil. “His mercy extends to those who fear him” brings us close to God. It makes him accessible, a welcoming God. Good news for worshipers during Advent.

Mary goes on to rejoice in what God has done for her and her people. “My spirit rejoices in God my savior, for he has been mindful of the humble state of his servant. …He has performed mighty deeds with his arm.” Mary acknowledged God as her savior, indicating that she was trusting in the Lord for her own salvation.

The reference to God’s mighty arm is a figure of speech, describing God’s powerful intervention on behalf of Israel. His past deliverance is the promise of a future deliverance for her nation, Mary believes. She took God’s promises literally and did not explain them away.

Mary was, in her own way, a theologian. She had a God-centered worldview. In a time when many people seem embarrassed to talk about God, seldom pray, or seek God’s will in their decision-making, Mary has given us a way of thinking and praying, singing and testifying, during Advent.

Richard Foster wrote, “In contemporary society our adversary majors on three things: noise, hurry, and crowds.” Let’s do as Mary did, slow down and reflect quietly and deeply, on God.