You have to like a writer who can harvest the wisdom from Augustine, Richard John Neuhaus, and Johnny Cash all on the same page. Michael Philliber does that, and more, in his recent book,  Our Heads on Straight: Sober-mindedness — A Forgotten Christian Virtue. 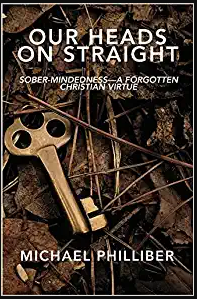 What could be more relevant for such a time as this? He posits the virtue of sanctified good sense (my synonym for his “sober-mindedness”) as a biblical antidote to the pandemic of fear, suspicion, anger, and public malice in American culture today. He manages to do so without finger-pointing or sanctimony.

During my years as a pastor I had studied and taught such texts as Titus 2:12,   “(The grace of God) teaches us to say ‘No’ to ungodliness and worldly passions and to live self-controlled, upright and godly lives in this present age.” I confess that I had never applied the concept of sober-mindedness in precisely the way my friend Michael has done in this book. I can see why he calls sober-mindedness a forgotten Christian virtue.

He dives into the biblical and classical usage of the Greek word sophroneo and its family of synonyms. This leads him to the conclusion that “Paul, Peter, and the gospel writers . . . picture the Christian life as a life of sobriety.” He is careful to point out that this word should be understood broadly as self-restraint, mature judgment, reasonableness, and rationality. Throughout the book, he refers to almost every use of the word and its cognates in the New Testament.

Philliber takes the Bible seriously. From the story of Jesus’ healing of the demonized man in Mark 5, we see the evidence of the man’s recovery as he was found sitting serenely, fully clothed, and “in his right mind” (sophroneo). This contrasted with his previous rage, agitation, and social isolation.

In Paul’s writings, sober judgment is for everyone, old and young, male and female, leaders and servants (Titus 2). It is counter-cultural and evidence of spiritual maturity. It is a work of grace in believers who reject those aspects of the world that are not in harmony with God’s will and who surrender themselves to God (Romans 12:1-3).

In the chapters that follow, we are shown how sober-mindedness is a biblical Christian’s alternative response to racism, anxiety, and hostile divisions in society. Citing Jeremiah’s advice to the Jewish exiles in Babylon to “seek the peace and prosperity” of the foreign cities where they would be sent (Jeremiah 29:7), Michael calls on his readers to be so heavenly minded that they can be of some earthly good.

A highlight of the book for me was his reassuring analysis of sober-mindedness as a healthy response to conspiratorial thinking. As one who believes that irrational conspiracy theories are a danger to American society, I found Michael’s exposition of Isaiah 8:11-13 especially hopeful and calming. The prophet says, “Do not call conspiracy what this people call conspiracy nor fear what they fear.” He couples this with 2 Timothy 1: 6-7, “God did not give us a spirit of fear . . . but of self-control (a sound mind, or sophronismou).”

He admitted that he had seen in his own experience how fear spreads like a contagion. Conspiracies thrive in an atmosphere of suspicion and dread. Whether it is the fear (my words, not his) of secret cabals who want to control the world, or of terrorist networks, or of super-powerful invasion forces, or fear of religious persecution, the answer is not panic, but sober-minded trust in a sovereign God.

The closing chapter in Our Heads on Straight takes us to Isaiah 40 where we meet this sovereign God, and we are encouraged to know him personally through Jesus Christ. We are invited “to come to our right minds . . . and turn our faces up to him.” If he is indeed the sovereign who is described here, this is the most rational, wise, and proper thing to do.

Warren Wiersbe once told me that words that sizzle in the pulpit often freeze on the page. To be sure, Michael Philliber is a pulpiteer, but his writing has the warmth of personal experience and the weight of biblical wisdom. Wiersbe also told me that new books are needed for every generation. Michael is a writer for this generation and his topic resonates. You have to like a writer like that. I do. My wife and I benefit from his pulpit ministry every Lord’s Day.