As Fathers’ Day approaches I am thinking about my dad. I write to honor him.

It is striking how infrequently the word “good” is used in the Bible in reference to men and women. We use it all the time to call people “good.” The Bible does not. For example, Jesus was approached by a man who addressed him as “good teacher.” Our Lord stopped him in mid-conversation with a question. “Why do you call me good? No one is good — except God alone” (Mark 10:18).

Jesus was not disavowing his own divine nature. But he knew the man was thinking of him the way ordinary people think of other people. So he deflected the man’s attention from fallen human nature, which is not good, to God, who alone is good. Only occasionally do we find the word “good” used of a man in the New Testament. One of those occasions is Acts 11:24 where it is used of Barnabus: “He was a good man, full of the Holy Spirit and faith.” 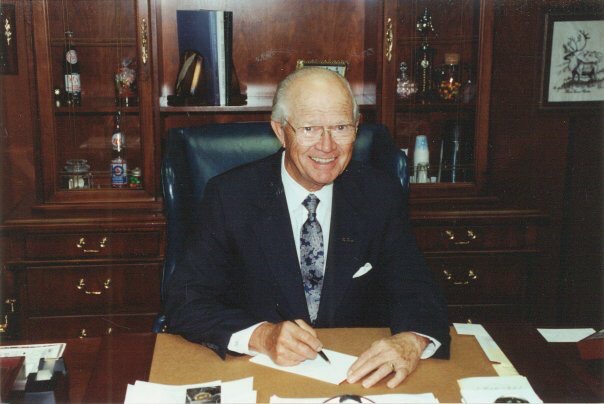 J.R. Faulkner would not want the word “good” to be used about himself. He often quoted John 3:30, which was a favorite text: “He (Jesus) must increase but I must decrease,” or as it reads in the New International Version, “He must become greater; I must become less.” But for me, it is hard to resist comparing Dad to Barnabus, who was called, “Son of encouragement” (Acts 4:36).

My father was reared in Charlotte, N.C. where, as a young adult he was an entertainer and dance instructor. He also worked in advertising sales in the motion picture industry. His life was radically changed in 1937 when he became a Christian through the influence of professional associates. He was encouraged in his faith by Christian businessmen in Charlotte.

He studied for the ministry at Bob Jones College where he met the young woman who was to become his wife, Magdalene Amstutz. After their marriage in 1943, she joined him in local church ministry, evangelistic work, and Youth for Christ. They joined the faculty of Tennessee Temple College in 1946, where she taught music and he served in administration and teaching pastoral leadership. He remained on the staff and faculty of Tennessee Temple in different capacities until his retirement as president in 1985.

He was called to join the Rev. Lee Roberson as his associate pastor in the Highland Park Baptist Church of Chattanooga, Tennessee, in 1949. These two men served as partners in ministry for over forty years. My father’s service alongside Dr. Roberson was characterized by loyalty, humility, optimism, hard work, and enthusiasm.

He assisted Dr. Roberson in the development and leadership of the college, the downtown Union Gospel Mission, a large branch church ministry, a bus ministry outreach, a church-owned summer camp for children, a daily radio broadcast, the support of scores of foreign missionaries, and a Christian elementary and high school. My dad was often invited to speak for conferences and churches on the subjects of Christian leadership and Sunday School work.

Since the word “good” is used so sparingly of people in the Bible, it prompts us to ask why it is used at all. One reason the word describes Barnabus is because he was an encourager (Acts 4:36-37). He was always looking for opportunities to lift and help others (Acts 9:27). That was J.R. Faulkner. All of my life I have met former students and church members who have told stories of how my father encouraged them by his counsel, kindness, and prayers.

He demonstrated love for people and his greatest joy in life was in seeing God work in their lives. He was a joyful Christian witness; he shared the gospel freely and frequently. In all my life I never heard him utter a single word of destructive criticism of another person. He never gossiped or indulged in the slander of others.

Barnabus was a Christian leader, a man of vision, who was ready for the great new things God would do in expanding the reach of the gospel (Acts 11:21-26). That was J.R. Faulkner, who was able to see the potential in people and opportunities. As a leader, he was a lifelong learner. He set a good example to me as a servant-leader who never cared about receiving the credit, but that tasks were accomplished and done well.

His calling was to serve in a subordinate role to another strong leader. Like Barnabus, who assisted Paul, my father understood the importance of loyalty and servanthood. He gladly served as Lee Roberson’s assistant for over forty years. Their relationship was unique, involving mutual respect and a willingness to “die to self,” a phrase I heard my dad use many times.

Barnabus was also known for his generosity (Acts 4:36-37). I have known a number of wealthy and generous persons in my time, but none more proportionately generous than my dad. He was never wealthy, but he was the most generous person I have ever known. More than once I accompanied him as he delivered groceries to an invalid woman whose husband was an alcoholic.

Many times I saw him slip some cash to a work scholarship student. Perhaps he did this because he remembered how it felt to work his way through college with very little walking around money in his pocket. He and my mother were exceedingly generous in their financial support of missionaries and Christian organizations. They taught their five sons to be faithful in tithing as a regular part of their Christian worship.

Barnabus was said to be a man of faith, full of the Holy Spirit. This is why he was called a good man. My dad’s faith was on public display before thousands of people. I am in a position to testify that there was no discrepancy or inconsistency between his faith as a public figure and his private faith as a father and husband.

I know something of his human limitations and weaknesses. He would be quick to acknowledge them. But his faith in Jesus was real and precious to him and he relied upon God’s grace and forgiveness. He endeavored to teach his sons to do the same. This example of integrity is one of the reasons I am a Christian and a pastor.

What he would want is for his faith in Jesus Christ to be his greatest legacy. Because of that, I believe it is safe to say that, like Barnabus, “he was a good man.”